I suspect that people who know me will do a double-take on the title of this post.

A couple of months ago, when I was about to set off for my “day’s” teaching (in reality, about 2 hours, but with travelling it keeps me out of the house for about 4) I was suddenly hit with that sinking feeling “I’m fed up with this. I don’t want to do it any more,” and since I am fortunate enough not to need the money, I decided there and then that this would be my final term’s teaching and from now on I would dedicate my time as much as possible to pure hedonism. I justified this totally self-centred decision to myself with the reassuring thought “I’m 63 years old, I’m 6 stone overweight, I’ll be lucky if I’ve got another 10 active summers ahead of me in which I can do exciting things, so I’m going to start with this one!”

With this thought in my mind, I turned to the most excellent cycling forum YACF and mentioned a few ideas I had of ways to spend my time, and it didn’t take very long for my pal Simon (aka loadsabikes) to take me up on my idle suggestion of Walking the Pembrokeshire Coastal Path. So that’s what we are going to do, in late June. With tents.

I have only once been on a backpacking holiday and that was in 2004 when I went to the Brecon Beacons for a few days with the children (hardly children by this stage since the youngest was almost 18). It started pretty badly in the sense that I was naive enough to look at a 1:25000 ordnance map and notice a pub, and a shop, and to think that such establishments might be able to provide us with things to eat and drink, but discovering, on arrival, that I had to be there at the weekend for the pub, or Tuesday morning for the shop. This left us with rather a bad feeling about the whole proceedings until we got to a particular campsite that was really most wonderful.

But I digress. I know that the Pembs Path is going to be tough. It’s 186 miles and we have given ourselves a fortnight in which to do it. That’s going to be 14 miles a day, near enough. Another YACF member told us, encouragingly, that the 5 days it took him to get from Newgale to Fishguard were the toughest he’s known, and he’s walked the Eiger Trail. So with that in mind, I’ve been going out walking.

Given that the Pembrokeshire Coastal Path is going to have an awful lot of Up and Down, today I wended my way to Leigh Station, where I parked the car, and walked up to Hadleigh Castle and beyond. Those with something of a memory and a sense of humour will recall that in 2012, Hadleigh was chosen as the site for the Olympic Mountain Biking events. Not Wales, not Scotland, not the Pennines or the North York Moors, but Essex. At least they didn’t put the bobsleighs on Canvey Island.

To be fair, though, the range of hills around Hadleigh Castle does rise out of the Thames estuary pretty abruptly, and so far as I am concerned it’s the best I am going to get within a reasonable distance of home. So that’s where I went today.

It was a pleasant afternoon but I left it rather late before I started, not leaving home until well after 3pm and I started walking just before 4pm. Everything was much drier than the last time I came this way, but then there was still a lot of snow lying. All that had long since gone, and mostly I was able to walk on relatively dry clay. There was none of that sticking-to-your-foot stuff of two weeks ago. I walked up the gentle slope towards the castle and made my way through the grounds. When I got to the Salvation Army Rare Breeds farm I found the café to be closed (tea rooms always close at tea time) so I followed what appeared to be footpath signs and found myself in the middle of the rare breeds. A very handsome cock turkey came and made threatening gestures to me and it struck me, never really having examined one before, that they almost appear to move around on wheels, rather like Russian folk dancers. I spied a couple of interesting pigs, but I couldn’t find the way out, so I asked a young woman who was about to give a load of hay to a donkey and she put me right. 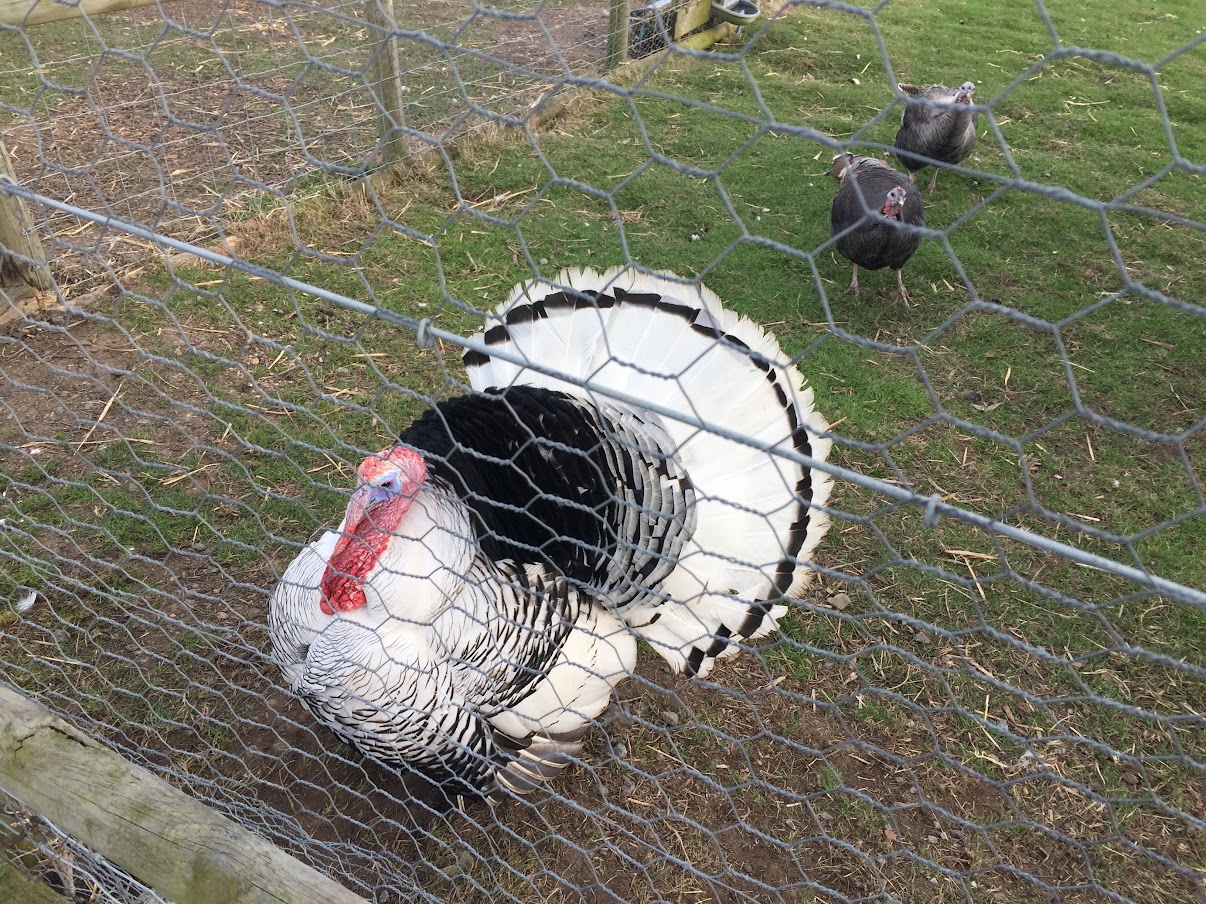 Even then, I couldn’t fid the right place and a couple of hundred yards further on I could see what was very obviously a well-maintained footpath on the wrong side of a barbed wire fence. I felt confident I woud be able to get through a bit further on and so I did, but this brought me into conflict with brambles and a hawthorn bush. I won, in the sense that I managed to get through unscathed, but it would probably have been easier to retrace my steps.

I had never been to this bit of the Hadleigh Country Park before and I could see what looked like a very fine visitors’ centre. I was making for that when a couple walking their dog came towards me.

“Is the visitors’ centre still open?” I asked.

From there I walked down the most direct path I could see, and this at last led me to some proper mud, which made the going a bit tricky for a couple of furlongs, but soon I was back close to sea level. This bit I had been to before, but the path is now in much better condition than it was on my last visit. 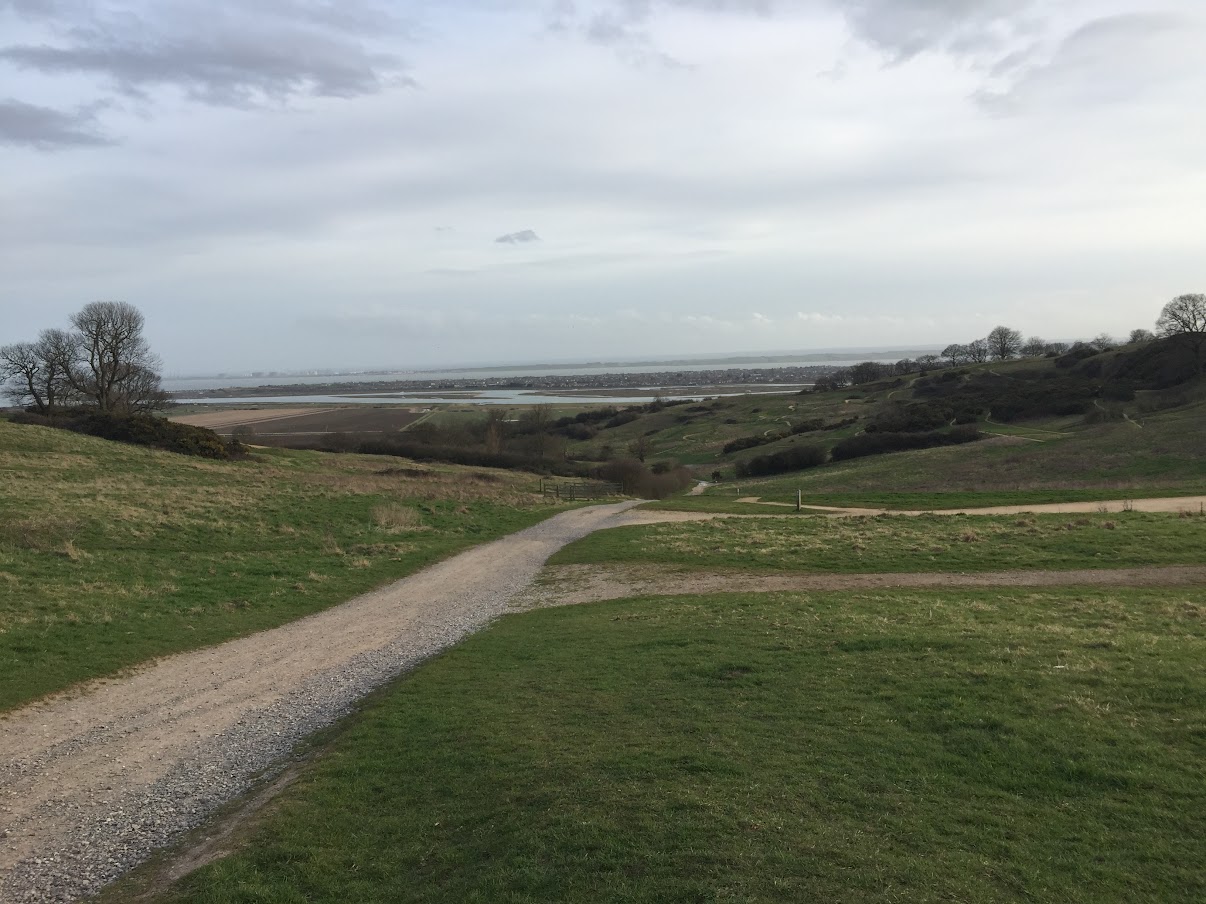 I climbed back up to the castle and retraced my steps, the Garmin conking out about 5 minutes before I got to the car. Almost exactly 5 miles in about 1 hour 55 minutes and with about 500 feet of ascent. That will do! 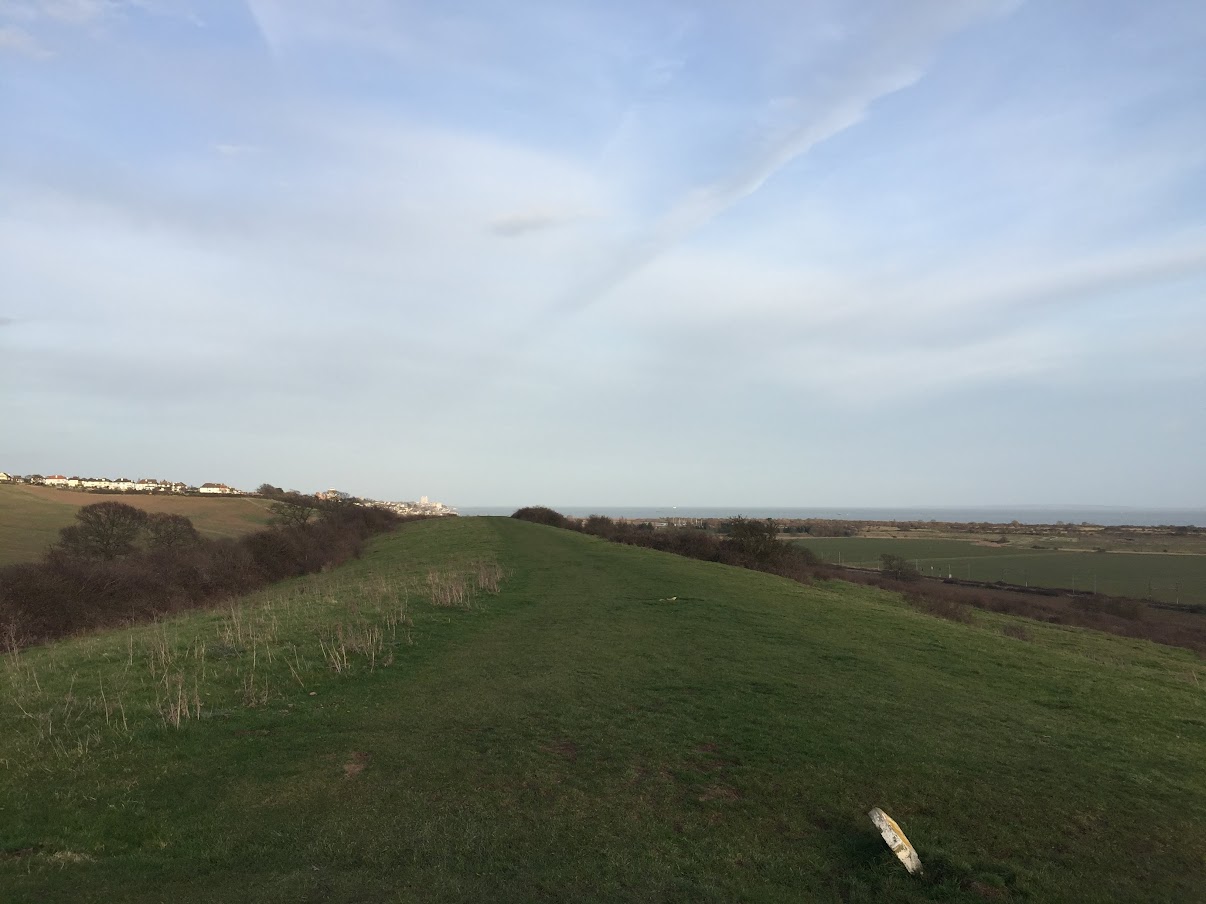